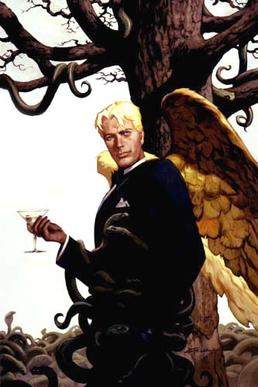 Where the Hell is Lucifer?

Where the Hell is Lucifer in Astrology?

Food for thought, and we hope, for laughter…

It all started with a conversation about the implications on the flesh and humans of meeting the Divine. Can we meet the Divine without being crashed by the intensity of the Frequency? The Burning Bush.  If God is love, what is then the meaning of Love? Love, Aphrodite… Lucifer and fire…

Looking at the astrological system with planets and fixed star,  another question arises: if the Zodiac, planets and stars are the frame of human existence, how is Lucifer represented?

Ouranos/Uranus (Sky) and Gaia were in constant embrace; great example of love, yet not allowing the emerging children to come to life. The lore describes Ouranos  angered by the noise of the children, restraining them in the depth of the earth – Gaia’s womb. Grief stricken and in pain, Gaia created a sickle and asked her children to use it to free themselves. Only Saturn/Cronos found the courage to use the sickle, ambushed Uranus, castrated him, becoming the new ruler. The blood released by the castration fell into the sea, etc..

“Homer presents Aphrodite as a symbol of love in evolution such as can be observed in the animal kingdom and experienced by man at different levels.”

Love would be the expression of the Divine restricting Itself to allow manifested life: “More theoretically minded, Hesiod describes Love at its highest level as it first appeared at the beginning of life at the moment of the castration of Ouranos, when limits were put to the infinite consciousness so that creation could appear.”

According to Hesiod, Aphrodite emerged, was born “from the sea foam that formed around the severed genitals emerged the goddess Aphrodite. […] Love at its root [is]as the fertilization of life by the Spirit.”

Well, I made enough jokes during workshops about Lucifer vacationing in his summer residence, the planet Venus, to reconnect the two larrons.  Venus-Aphrodite, the dual star, Morning-Star and Evening-Star; Venus tracing a pentagram while moving in the sky…

In his dialog with Socrates and Timaeus, Plato calls Venus the Morning Star, which happens to also be Lucifer’s name: “The sun and moon and five other stars [seven planets found in astrology], which are called the planets, were created by him in order to distinguish and preserve the numbers of time; and when he had made their several bodies, he placed them in the orbits in which the circle of the other was revolving — in seven orbits seven stars. First, there was the moon in the orbit nearest the earth, and next the sun, in the second orbit above the earth; then came the morning star [Venus, when rising before the Sun] and the star sacred to Hermes [Mercury], moving in orbits which have an equal swiftness with the sun, but in an opposite direction; and this is the reason why the sun and Hermes and Lucifer overtake and are overtaken by each other.”

En passant, if Venus=Lucifer = love, then Lucifer, the Light Bearer, plays out as the emancipator; or proof of God’s love, the message would be: you are free to live far from Me, to have your own path and opinion, out of my Womb and Consciousness. You can also have a little ego trip; yet, in the grand picture, we are all one and will sometimes be re-united.

Most fixed stars both exhibit a bright and shady personality. The murky side of the soul, or part of self in need of attention, can be scrutinized through dark asteroids, such as Sado, Pandora and… Lucifer! “The house and sign in which asteroid Lucifer falls on the Birth Chart shows where a person exercises power and seeks immediate satisfaction regardless of rules or regulations. It is usually a strong source of healing for the native despite the trouble it causes. All or nothing mentality.” Dark Asteroids in Astrology – Nessus, Dejanira, Sado and Lucifer | Saturnarium

The astrological system, Zodiac, planets, fixed stars, astroids can be interpreted as a representation of the manifested aspect of the Deity.  Humankind being one of the extensions of this Divine Being, our astrological world and human experience are one of the interfaces between the Deity and materiality.

PRACTICE:  what about you? Let’s make this post practical and fun: check the position of Astroid Lucifer in your natal chart. Use your favorite astro application or astro.com, extended chart selection. Then in the additional objects section, on the right, add 1930 (the number for Luci) and voila! What house, sector of your life is colored by his irreverential presence? Does one of the planets in your chart has a relationship with Lucifer = obvious aspect such as conjunction, opposition, trine?

Below are listed a few clues for the interpretation.

Venus in previous articles: – I remember writing a detailed description of Venus and pentagram, cannot find it in my own website or even in my files… if you do, let me know!

2016 Then while I was wondering how to present the main energetics about the next eclipses —August 18th almost-eclipse and September 1st (Solar) and September 16th (lunar) a long forgotten paper re-appeared, notes about Immanuel Velikowsly’s book: Worlds in Collision. In this work, published in 1950, Velikowsky theorized that around the 15 century BC, Venus was ejected from Jupiter, as a comet. This event triggered disasters on Earth. Venus and Niburu would be connected. Back to the same story, a cycle of about 3500 years within a cycle of 13000 years.

Now, let’s be reminded that eclipses are adjustments between past and future, and trigger movements of the axis. Mini movements in those cases, but consistency in the necessity to adjust ourselves.

In the context of preparing ourselves, harmonizing with the energies of the two august eclipses, 7th and 21st, the idea is to review our relationships with others and with love, through Venus’ peregrinations.   The eight-year Venus cycle played a significant part in the clearing of the darkness on Earth (2004-2012) as discussed several times in the past.

Now, we can also be inspired by the Venus Synodic cycle, the relationships between the goddess Inanna and the Sun, the journey between the Morning Star and Evening Star. Eugene Johnson offers great insights that I will briefly introduce.    “when Venus disappears from the morning sky and reaches an exterior conjunction with the Sun. This period is described in myth as “Inanna’s journey through the Underworld.”  https://sabianearth.com/author/anthropik9/

“According to the Sumerian myth, Inanna desires to visit her sister Erishkegal, the goddess of Irkalla the land of the dead. To do this she must pass through seven gates before getting there and each Gate is marked by a Moon Venus conjunction, and at each Gate Inanna will be required to give up something important.

“We have been following in the previous articles in this series, Innana, Queen of the Heavens, adorned herself with her robes and jewels and seven divine degrees fastened to her belt, before beginning her  journey to the “land of no return”  ( Astrologically this ‘replay’ began on March 25, 2017 with a Sun and Venus conjunction.)  to attend her sister Ereshkigal’s husband Gugalanna funeral.

Rudhyar delineated an eight-fold development of compete aspect cycle.  For this essay, I will pare it down to the essential four phases, namely: the conjunction, the first quarter square, the opposition, and the last quarter square.

The conjunction event is considered as the ‘incarnation’ of a new entity, new purpose, idea, or project.  Here, in our experiment, it is the successive Moon, Venus conjunctions we are looking at.

The first quarter square, which is the opening square, marks a crisis point in the cycle in which direct action is required for the process to proceed successfully.  This is a critical time in the evolution and formation of the fundamental purpose that was incarnated at the conjunction.

At the opposition, the ‘full moon phase,’ the challenge is to clarify and objectify your purpose.  At this point in the cycle the ramifications of the ‘bigger picture’ begin to come into focus.

Then, at the last quarter, the closing square, the challenge is to revise your thinking and reevaluate the meaning and consequences of what you are doing as it relates to your initial purpose.”

This is a time when all the ‘unnecessary baggage’, inappropriate attitudes and ideas must be eliminated, before proceeding to the finish line and the completion of the cycle.”

“This Fourth Gate, the ‘keynote’ is compassion, hence the challenge during this “Venus Month” is to become awake to how we can become more compassionate and empathetic to others.   As Inanna had to give up her breastplate, the armor that protects her heart, likewise before we can be fully and truly compassionate we have to give up our psychological ‘armor’  and allow friends and love to come into our heart.  While this armor does protect us, it does so with the price of dulling the quality, and quantity, of our lives.” “

“If you focus on Venus’ bright side, the energies offer a window to make peace with the past: why would Venus, the planet most associated with love, be also Lucifer’s partner? When the Creators – Aspects of God— accepted to incarnate, they embraced the experience of the Darkness, and human beings did too, endorsing the role of the little cells in Their bodies, as partners in manifestation.” The idea is to see the light within the darkness; or to embrace the merging.

if you have not visited Sacred-Texts yet, check it out; a fantastic library!

WHILE AMERICANS ARE ASKED TO LOSE THEIR BUSINESS AND WEAR A MASK… “According to internal documents from the Department of Health and Human Services obtained by Axios, Border Patrol put an average of 321 children per day in HHS custody by the beginning of March. Those would be the “cages” once maligned by the media, in contrast to just 47 per day on average during the first week in January. HHS also reported child migrant facilities at 94% capacity “and expected to reach its maximum this month.”

So, amid a global pandemic, Immigration and Customs Enforcement says that we’re set to see a deluge of migrants the size of which we haven’t experienced in “over 20 years.” And, whereas a negative COVID-19 test is required for entry to the U.S. via air travel, Border Patrol has been releasing migrants into the country without any tests at all.”

As for the Financial Relief Package… most people avoid thinking, looking at a pretty challenging future.  They jump on the vaccine and want to believe that it is going to be ok. Printing or borrowing more is not a long term solution. Although we tried to avoid the blooming of the New World Order, manufacturing situations and imposing drastic laws, it appears that the average human is ready to bow, as long as life continues as is.

Denmark, Norway, and Iceland stop using AstraZeneca vaccines. The decision, made on March 11th, is a response to blood clots formation after vaccination.