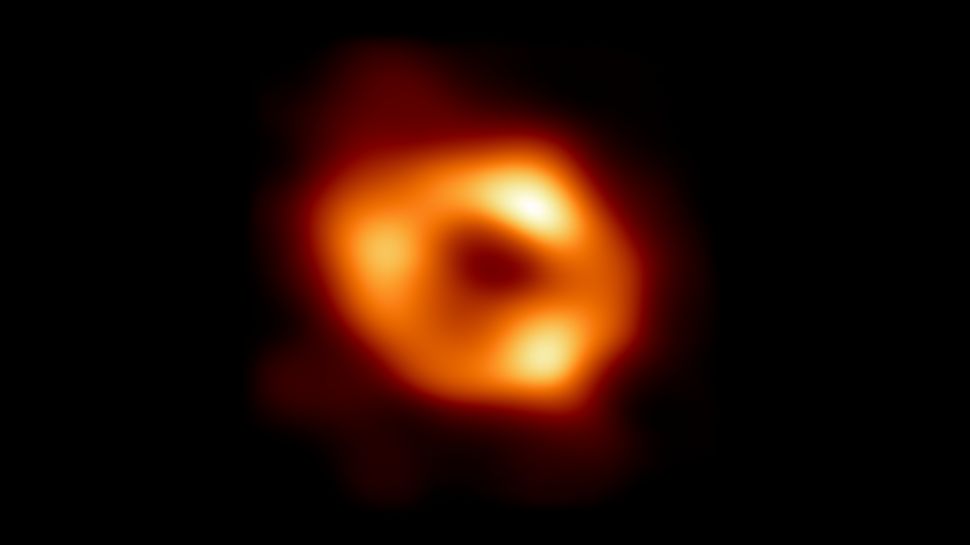 You have probably heard about it already, first image of a blackhole

“University of Arizona astronomer Feryal Özel, at a news conference in Washington, hailed “the first direct image of the gentle giant in the center of our galaxy,” showing a glowing ring of red, yellow and white surrounding a darker center.

Sagittarius A* (pronounced Sagittarius “A” star) possesses 4 million times the mass of our sun and is located about 26,000 light-years – the distance light travels in a year, 5.9 trillion miles (9.5 trillion km) – from Earth.”

In 2019, scientists were already able to release the image of a black hole in Messier 87 or M87, further away than Sagittarius A in which we how have a pick. M87 is a galaxy located at the center of the Virgo cluster, itself a galaxy cluster.

This unique image was obtained by a powerful telescope network called the Event Horizon Telescope, that ‘observes for a few days a year at 230-450Ghz simultaneously on telescopes ranging from Chili to Hawaii, to France to the South Pole, then ships the data to MIT and the Max Plank Institute in Germany.” Reddit

We are in the middle of a very powerful eclipse season, with a release of old contracts, karmas, enabling humanity to start afresh. The new start will be anchored with the next Lunar May 15-16th eclipse.

Sagittarius is our connection to the Galactic Center, to the Womb of our Mother, vehicle of manifestation of the Divine Creator.

Not sure when this image was first seen but the news was out last night. On May 11, Ceres in in cancer, retrograde, 3 degrees from Lilith, in Gemini.

Today, the news hit our consciousness: Lilith and Ceres are conjunct at the cusp (beginning) of Cancer, mother, home.

Lilith represents the part of the feminine that has never surrendered to the aggressive, oppressing male energy, represented in our galaxy by Orion.

Well, the male energy had, had to be aggressive enough to push back the Darkness, that had also engulfed the creation and the Earth, when humankind was experiencing the energy of the 2nd chakra.

Ceres is the mother who had to accept the sacrifice of her daughter and the travel in the underworld with Pluto.

According to the lore, emanation of our subconscious knowledge, Lilith was banished from Eden and replaced by the submissive Eve, eventually extracted from Adam’s body. The curse on women is over. the terrible words of JHWH are obsolete. ” Gen 3:16

This visual access and forced attention to the Galaxy, is a message. We have delt with Orion and with the past; we can now build a new world, based on the principles and energies of the heart.

Coincidentally — is there any coincidence in the Universe? The Sun, the heart energy is at less than one degree of the North Node, our collective direction, collective compass being the lunar nodes axis.

If you want more information, feel free to contact me.